National Military Appreciation Month (NMAM) has been celebrated since 1999 in the U.S. to commemorate, recognize and honor former and current members of the U.S. Armed Forces who served, fought and sacrificed for the nation. At Crowley, the influence and contributions of military members and veterans provide immense value as they instill valuable knowledge and experience across the organization. This month, we're proud to share some of their personal stories and insights about the impact their military service has had on their careers.

Leadership and Teamwork Are Paramount to Hauling Fuel in Alaska

I joined the Air Force right out of high school. I quickly learned there are two things needed to accomplish any mission: leadership and teamwork. These two skills are also essential for any organization to be successful, and by serving in the military, they became part of my mindset.

Leadership is often defined as the art of influencing people to accomplish a mission. I learned that art by placing the needs of my troops first. This behavior influenced them to do what was needed to be done for mission success. Throughout my 20 years in the Air Force, I was placed in many situations that required steady leadership. Whether it was being deployed to combat zones in Saudi Arabia or being at home station, leadership provided a structure for myself and the airman who served under me, which nurtured the culture of trust.

Over the 15 years I have been in Crowley, I've replicated that leadership structure where being a selfless leader translates to always putting our customers first, too. Which enhances my working relationships with them. 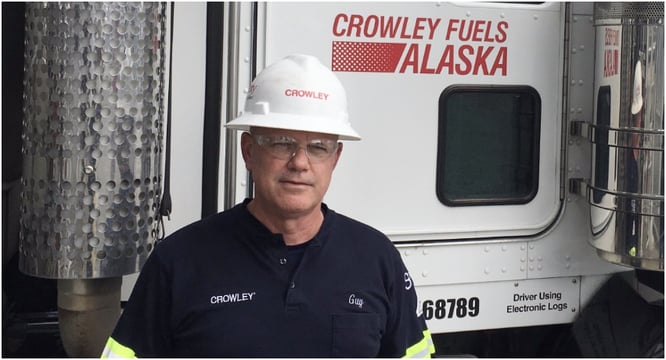 Lokahi: The Value of Unity and Teamwork

Being born and raised in Hawaii, I grew up learning Hawaiian values. There is a Hawaiian word Lokahi (low-kah-hee), there are many meanings to this word, but it can be interpreted as unity or the value of teamwork. Teamwork in the military is paramount. While being deployed to Saudi Arabia during Operation Desert Storm, we all had to work together to make sure we had our aircraft mission-capable daily under adverse working conditions and long hours. Everyone was expected to do their part.

That situation is similar to hauling fuel up here in Alaska, especially in the winter. We have a team of drivers who must deal with snow, icy roads and sub-zero temperatures. All the parts of the operation must work in unison to keep the fuel flowing 24/7, 365 days a year, and do it safely.

During my military career, I have been deployed many times, so I was away from my family for long periods. Hauling fuel in Alaska has a similar impact, where having long work weeks are commonplace. Being able to operate as a high performer in those two scenarios has not been easy, but I could not have done it without my spouse's support, she has been with me since the start of my military career. I'm grateful to have her as a support system for everything I do.

Click here to learn more about how Crowley Fuels Alaska